Our story began in 1996, as Kim was attending classes as an undergraduate in the pursuit of her Psychology degree. One day, Ruth Turner, an Ojibway graduate student working as the teaching assistant in one of Kim’s classes approached her, and asked if she was also First Nations. This was particularly noteworthy, as only a couple of psychology students were Indigenous.

Ruth was the first Indigenous graduate student in the Department of Psychology. Ruth and Kim became close friends, where Ruth mentored Kim on what it would take to get into graduate school. Ruth and Kim shared their experiences of being the only Indigenous students in their classes advocating for themselves at a colonial institution. Ruth supported Kim in learning more about research, and with her application to grad school.

After many years, Kim wanted to repay Ruth for all of her generous time and wisdom shared. Kim asked Ruth how she could ever repay her and Ruth simply said, “Bring others along.”

Ruth would go on to become the first Indigenous person to graduate with a PhD in Psychology from SFU. Kim would be the second, and later, Billie Joe Rogers the third.

During her time at graduate school, Kim fostered the idea of sharing the experience she had with Ruth, and sought out like-minded Indigenous students. First there was one and more quickly followed as Kim showed them how to adapt to program requirements, excel in the programs, and build stronger foundations to thrive.

Where We are Now

As the Reciprocal Consulting team continues to grow we have developed an unwavering commitment to taking a strengths based approach to our work and celebrating Indigenous stories and experiences. Bringing others along now guides who we work with, how we work with communities and organizations (both public and private sector), our pedagogy, approaches to teaching and working with students, and how we contribute to the Reconciliation movement in Canada.

This concept is based upon the connections and similarities we have with our cousins of the ocean and waterways. In many Indigenous cultures, we learn and share knowledge of how to behave and pass on knowledge. Orca societies are matriarchal, meaning that the females are head of the societal structure of these pods, these females carry with them crucial knowledge about food resources that can mean life or death for their family and kin.

Similarly, the organizational structure within Reciprocal Consulting is comparable, the leadership is made up of very strong and powerful women sharing their knowledge as the organization grows and expands.

The canoe with the four figures is a metaphor for travelling together, this provides speed and strength for the long journey which lays before them. Alongside the canoe you will see the three orca whales that have joined the paddlers in that journey.

There is a historic connection of the orca that we felt still resonates within the company and we wanted to ensure that connection is not forgotten as the company expands.

You will notice that the moon and the stars is a significant feature in this logo. This illustrates our connection as “star people” to the universe but also to grandmother moon and mother earth and that inherent connection that we have. Within the moon you see the silhouette of a female in the negative space, this figure with her
head tilted slightly upwards connotes a positive and courageous feeling as she bravely looks to the future. 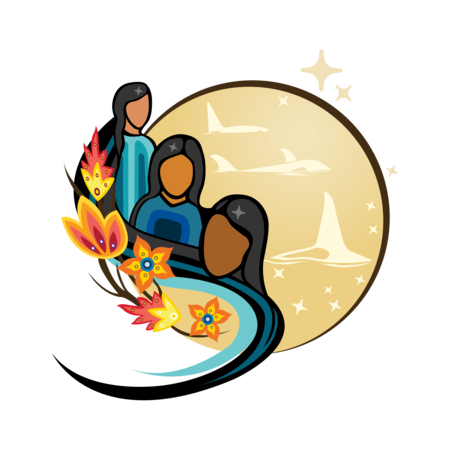 In this concept, it features the strength and resiliency of women as illustrated by the three figures. Each figure is uniquely placed with purpose and intent. One is looking towards the future, another looks to the present and the third looks to the past. In any journey, you’ll need to be ever mindful of all three. The long flowing hair of all the figures merge together as do the rivers flow into the ocean. The flowers are woven into the hair of the female figures too. This provides us with a reminder of not only our connection to the water, but to the land.

The moon and the stars are also key components in this concept as we have the connection. Grandmother moon affects us all, but also affects the very nature of Mother Earth, the cycles within women but also with the tides of the oceans. We are all connected. You will also notice the orca illustration within the moon. This is a nod to the past and the connection that the orca whale has to the origin story of Reciprocal Consulting. The colours are earthy and pay homage to that connection we have to the waters and the land of Mother Earth. The font in the word mark was selected for its boldness and strength, but also for its legibility and contemporary aesthetics.

Mark Rutledge, CDPTM  is a designer with Animikii. Mark is Anishinaabe (Ojibway) and a member of the Little Grand Rapids First Nation. He lives and works on Kwanlin Dün and Ta'an Kwäch'än Council Territories in Whitehorse, Yukon.